My experience with alcohol after my brain injury 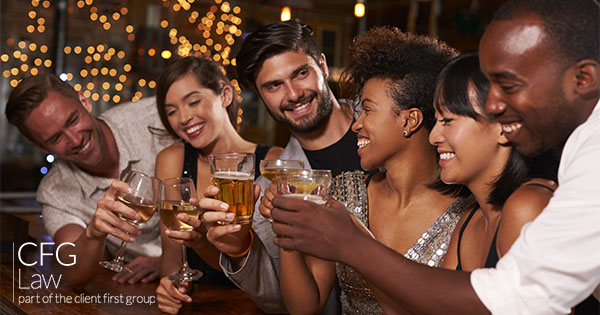 I have a few male friends that have brain injuries and I know that on occasion we all have had a problem with drinking a bit too much booze; not to the point of being violent or the police being called or anything like that, just getting into the habit having a few cans on a night. For me, this has easily turned into a habit leading to weight gain, poor sleep and low self-esteem.

I assume/hope that this is just an issue concerning myself and my friends, but I suspect it isn’t. None of us are proud to admit it, especially with there being a stigma around alcohol, but drinking with a brain injury is even worse! It’s true that I know of people that consume a lot more, I look at them and think I don’t even have an issue! As my mother has correctly pointed out in the past, “They don’t have a brain injury though, Brooke!” For us brain injury survivors, our tolerance is far less and in an ideal world, we shouldn’t drink at all.

Nobody wants others to think that they drink too much but I have to admit, there have been times when it has got the better of me, especially when I’ve felt a bit lonely on an evening; it’s easy to open a bottle of red or crack a can open! If we continue to be silent, it can develop into a worse problem. If nobody wants to talk about it, then it doesn’t get talked about! So I’m going to speak about my experiences in the hope that it might be of help to others.

The fact is that alcohol negatively impacts the function of the prefrontal cortex, the frontal part of the frontal lobe, the part of the brain that is specifically responsible for making decisions, processing information and monitoring behaviour. A very common traumatic brain injury is to the frontal lobe (mine included), making alcohol further exacerbate the problems you already experience.

I’m not talking about the weeks and months following my injury, in those earlier days, I was very much focused on doing the best thing for my recovery and had all the hope and enthusiasm of a guy wearing new trainers he got for Christmas and clutching a preplanned workout from ‘Men’s Health’ as he swipes into the gym on the 2nd January. The rate at which you improve is rapid at first; I was planning on doing all sorts - I was going to run the length of Great Britain, only eat the healthiest food, climb Mount Everest and goodness knows what else. I’m not talking about those positive early days, I mean after some time has passed, maybe more than 3 years later, when those high hopes that I had hadn’t happened and I no longer possessed the same enthusiasm!

I remember my neurologist telling me that I should never drink as it is very bad for my brain; I and my family enthusiastically nodded in agreement. Obviously, nobody was going to argue with that! He was the expert, plus it was the logical thing to do, the brain is very important, I had hurt my brain, so the very thought of purposely engaging in something, like alcohol consumption, that would further damage was just unheard of! This was never a big deal anyway as I found that when I tried it, alcohol affected me in a different way than it did before my injury. The chances are you will notice the same and may well want to give it up completely, which is exactly what I did for about four years.

I would never encourage anybody to drink and if you want to become teetotal for the rest of your life then that is great, you’re a better person than me! I’m just talking about my own experience and that is not something I could commit to.

Every brain injury is different, and every person will have a different experience, but you should certainly STAY WELL CLEAR OF ALCOHOL FOR THREE YEARS POST INJURY as this is the time period when the most natural healing takes place, and it would be so foolish to jeopardise that!

For me, the period of time for which I was ‘in recovery’ only lasted so long before I wanted to start doing ‘normal things’ again and besides, I was beginning to find that people having sympathy for me was becoming extremely patronising. Although the neurologist’s advice made sense in theory, in the real world I didn’t want to be someone that didn’t drink ever again and said things like “I don’t need alcohol to have fun!” (not that there’s anything wrong with that!). My mates and pretty much everyone I knew liked to go occasionally for a drink, the pictures that were constantly posted on social media constantly reminded me of this. Rightly or wrongly, so much of the social scene, especially in the UK, is centred around nightlife and alcohol consumption. Social media doesn’t help when you see pictures of people you know or used to know, out enjoying themselves – this made it a scene that I wanted to get back to.

There were a few things that I had to be realistic about: that I was now a massive lightweight, that becoming intoxicated in a public place would leave me exposed and very vulnerable and that too much alcohol will really affect my sleep. It’s true that you don’t need it, but upon really thinking about things I realised that it wasn’t the booze I missed so much as the social aspect of having a pint with my mates, all I wanted was to be part of the gang again! I just wanted to have a life again, I was sick of being ‘that guy who had the accident'. I was so determined to be a part of the social scene again that it was inevitable that I was going to try.

Through a lot of trial and (mainly) error I have devised the following rules for going out in bars/clubs:

You’re about to do something that will be an assault on your senses and will fatigue you, so it is important to give yourself the best possible start. Something I used to try and do was get ready half an hour before I’d have to leave then lie down, relax, and shut my eyes for 25 minutes so I’d leave a little more refreshed. I used to call it giving myself ‘a boost’. This done correctly would enable me to enter somewhere with much more confidence.

I do not sleep well, when I drink too much, I tend to wake up at 3 am (or even earlier) and never get back to sleep. Sleep is so very important as sleep time is healing time! Through trial and ever so many errors, I have discovered that I can have two drinks and still sleep ok, but remember, I have lived with my head injury for 15 years now. For years it would have only been one!

If you’re anything like me then you are going to want more than one, this WILL ruin your sleep, your next day and likely the one after that! The only thing that can prevent this is your willpower, you have to be strong and when you are you will feel good about yourself!

There are many alcohol-free alternatives now so take advantage

If you think about it, socialising successfully requires you to be alert, think quickly and be on good form; the effects of alcohol actually dulls the senses meaning you won’t have as good a time and you definitely won’t be as good company. I tried drinking soft drinks which are ok for maybe one drink, but it quite clearly looks like you’re having a soft drink. It’s become quite fashionable to drink alcohol-free drinks. When I first started going out again there was hardly any, maybe a couple of bottles of Becks Blue at a push. A far bigger selection of alcohol-free drinks are available these days and not drinking is much less taboo, dare I say it 'cool!'. They’re a placebo but one that stops you from standing out, remaining alert and sleeping well at the end of the night!

Avoid caffeine at all costs

I used to feel the effects of fatigue taking hold and would choose to drink excessive amounts of caffeine in order to combat the tiredness. This was something that I used to do a lot before realising that fatigue was not something you can fight. When you need to rest, then rest is the only remedy. In my desperate attempts to re-energise myself one time, I remember drinking more than five cans of Red Bull. Since having a brain injury, I have often had difficulty learning what is blatantly obvious. It took several times still staring at the ceiling at 4 am to realise that caffeine doesn’t energise you, it only stops you from getting any rest. Trust me on this as it has taken endless amounts of sleepless nights before the penny dropped!

Have a pre-planned exit strategy

When you enter a place of high stimulation like a busy bar then you will be straining to hear and filter out the music/background noise, straining to see in the poor light, talking louder to make yourself heard. Just like a car driving at 100mph, you will be burning a lot of fuel or using a lot of energy so no matter how well-rested you are beforehand, at some point your energy will run out. In my previous experience, this tended to happen quite suddenly and in the past, I have been left stranded. Your friends, no matter how much they promised to be there for you previously, will be drunk and less helpful. Don’t rely on others or expect to be able to just get yourself home, you will be stressed, exhausted and poor at decision making. Instead, make plans beforehand when you have time and are thinking straight.

Finally, if you turn up somewhere rested and full of energy you should have a great time but this can quickly turn sour as fatigue takes hold. I always had a problem with this as being out with friends was a long-term goal of mine - the occasion and excitement of it all would soon tire me out and I would fight it - I have remained at social gatherings too exhausted to engage in any kind of conversation. Rather than be there a longer amount of time as a poor version of myself, I have learned to be there for a shorter amount of time as the best version of myself. Burn brighter for a shorter amount of time and you will be better company, leaving people with a better experience of you.