Don’t Panic! How I navigate my way out of a state of panic! 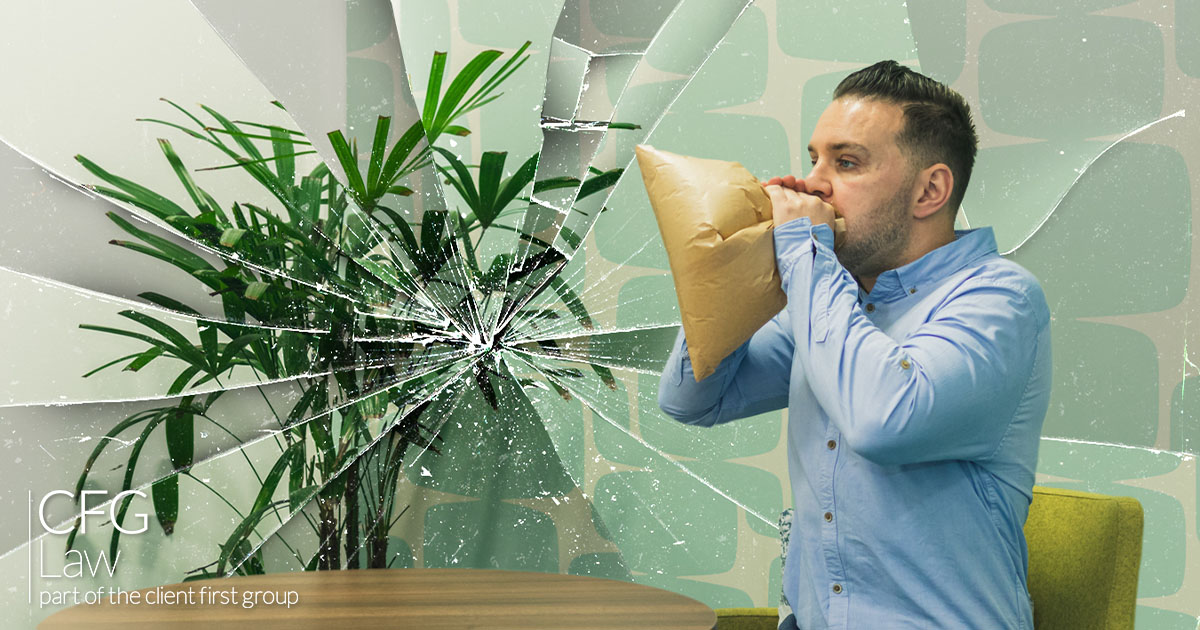 For up to ten years after I had my traumatic brain injury, I would get myself into such a state of worry and anxiety quite often. It doesn’t happen that often any more, but it did happen yesterday.

I was supposed to have been training for a marathon that takes place in a little over a month but I haven’t been training. It’s been on my mind for weeks, but rather than just running, I have been procrastinating and saying I will start tomorrow, the next day, the next week and so on! The last week I have been getting more and more worried about it, but rather than doing something about it I have just let the worry get worse, madness! Why do I do this and is this just me? I don’t know!

It came to a head yesterday morning just after I got up. I hadn’t slept well and I was tired (which is never a good start!). I started worrying about this race and what would happen. It starts with a feeling of nausea in my stomach; I get a tingling feeling in my arms that spreads to the tip of my fingers and my face. In frustration, I gulp down the strong black coffee I have just made for myself (which in hindsight adding caffeine was not a good idea). My heart starts to beat faster and my breathing becomes shallower and more erratic. Internally, I start cursing myself for not being organised. I imagine how life could be, how life should be because I should be going for 20 mile runs at this point. I should be feeling and looking great, but instead I met my friend in IKEA for meatballs and chips the night before!

Thoughts then turn to the stag do I am invited on in a few weeks. I should have made a point about staying in a quieter room and would I be able to keep up? I started writing a book in 2012; why didn’t I keep that up? That would have been an achievement! I was meant to email lots of universities to arrange to speak to their law degree students about my experience of a personal injury claim, but I haven’t emailed a single one and the summer, when they would have been planning the year, is over now. I think how much better my life could be if I just didn’t go out on that evening in 2007, I wouldn’t have got run over, how different life would be if I didn’t have a brain injury. I then top it off with how pathetic I am being and ask myself what I would do if I had real problems and that people have so much more to deal with in their lives. This only serves to add a feeling of guilt to the situation, rather than making it better!

I tend to really kick myself when I’m down and overwhelm my brain with so many things to think about when I am tired. I can see this now with hindsight, but when I’m in that moment, logic gives way to panic.

I recognised this panic though and from previous experience of this, I know that I am now in a situation that is possible to improve. When we panic, we take short shallow breaths. Our bodies need more oxygen, so we breathe faster, but because the breaths are shallow we are not actually getting any more oxygen which makes you panic so your heart rate increases. The logical thing to do is slow down and take deeper breaths, but it is near impossible to be logical when panicking! These breathing exercises fool your body that you are calm and provide a simple template to guide you out of your panic. It forces you to breathe deeper and slower and gives you something to concentrate on so you don’t panic, both of which slow your heart rate down. I use an old technique that an Occupational Therapist once taught me, that she called square breathing, to slow my heart rate down.

I sit down and close my eyes and start to concentrate on my breathing:

I do this ten times. In fact, because of my poor attention span, I probably do it 8, 9, 11 or 12 times, but either way it works! If you have never done any breathing exercises before then you should start with triangular breathing which is breathing in for five seconds, out for five seconds, hold for five seconds and repeat. Holding your breath for five seconds may be too difficult at first, especially twice, which is why the triangle breathing is an easier option at first but persevere and you will get used to it.

Once I had dealt with my increased heart rate and shallow breathing, I had to deal with the negative thoughts that were flying around my head. The thoughts were like angry insects; I would think about them for about a minute before I thought of something else and never focusing on one thing long enough to deal with it. I then write them down, just as though I had caught the angry insects in a net.

On the piece of paper I wrote:

Now that I have got them written down, staying calm, I can deal with them one by one:

Marathon Training: I hadn’t actually announced to anyone that I was running the marathon, I paid for the entry out of my own money and I hadn’t collected any sponsorship so for me to drop out would mean I was letting nobody down. I emailed the organisers and asked if I could exchange my ticket for the ten-mile race held on the same day. I am confident that I can do that with only a months’ training, whereas, to attempt a marathon with insufficient training would be detrimental to my health and pretty dangerous.

Poor Diet: This was actually only me focussing on that one meal at IKEA. My diet is ok and so nothing to worry about, but I made sure I had a low-calorie meal with plenty of vegetables that evening. A healthy meal to me is a plate made up of a lean protein (chicken, fish, eggs, tofu, lean red meat once a week), taking up space on the plate that is the size of your palm. The space of two palms should be taken up by carbohydrates (rice, pasta, potatoes, corn, etc.). You can then fill the rest of your plate with salad or steamed vegetables (aim for as many colours as possible). If you’re cooking something like a pasta dish then make too much and freeze some in batches to microwave later. Plan what you’re going to eat for each meal. If you can, do this on a Sunday night because the more you can plan the less you will be surprised and the more smoothly your life will run throughout the week.

Stag do: I text my friend who is organising it all on a night in the week when I knew he’d be at home, explaining my concerns and asked if he could put me in the quieter room. He said he already had done! My friends are good; they know what happened to me so it was just a case of asking and I had been worrying for no reason.

University talks: This is one of those cases of ‘just do it!’ I had nothing planned the next morning, so I got up and planned to email five universities. I chose five because it is not overwhelming and if I did any more, it’s a bonus! I just wrote one letter and changed each one relevant to the university that I was contacting.

Writing a book: This has been an ambition of mine for a while. I have spoken to people who have written books and they advise getting up each morning at six when you’re fresh and writing for half an hour. These people didn’t have a TBI, though! Yes, I would like to do it, but it’s not a priority. I decided to concentrate on doing more public speaking and having more to write about in the book!

Feeling pathetic: This is a recurring problem for me. It’s something that a lot of people experience after a traumatic brain injury. You lose your identity and it is unlikely that you will be able to do what you did before.

Whether it is just a mix up in your brains chemistry or having difficulty dealing with what has happened to you, these feelings can turn to depression. Depression is not something that goes away with time; you can’t get over it by just toughening up. Some symptoms of depression include:

Depression is a serious condition that can be helped and is one you must tell your doctor about! For me, it’s a feeling of low self-worth. It shows itself if I am not busy with anything or if my mind is not focussed on something, then my brain tends to focus on something negative. Completing the above tasks has given me that sense of achievement that I was lacking, making me realise that I am not worthless and I give myself a break about that.

When I am in a state of panic then it feels like ideas swirl around my head like angry wasps landing for long enough to sting me, with a feeling of disappointment, then they fly away. I need to catch them, or in this case, write them down so I cannot forget them. After a head injury, it is very easy to become overwhelmed by too much stimulus and you lose the ability to multi-task. Things become much more manageable if you break them down. Dealing with tasks one at a time is a lot less intimidating than facing a long list. A lot of problems can be dealt with if you break them down into manageable tasks.