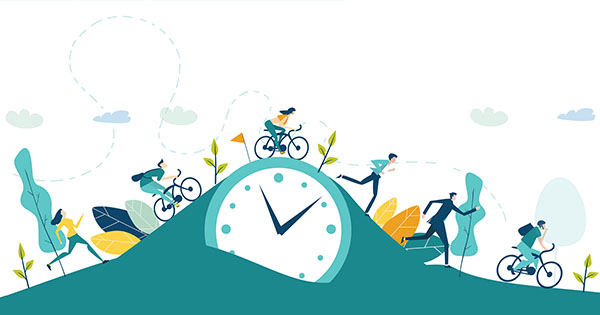 Whilst out enjoying a ride near his home, Gareth was knocked off his bike on a roundabout when a vehicle failed to see him and collided with him. Gareth sustained serious injury to his leg and knee in the collision.

Gareth was a very experienced cyclist and was knocked off his bike through no fault of his own.

As a result of these injuries, Gareth required specialist surgery to insert pins and plates into his leg and also suffered psychological symptoms and scarring and deformity to his leg.

The challenges faced by Gareth

During this time, we were on hand for Gareth and his family, ensuring they had the support they needed for the hospital transfers. We also looked at options for Gareth’s elderly parents to visit him whilst he was in the hospital.

Gareth had been working as a shift manager in a pub before his accident, but due to the injuries he sustained to his leg, he wasn’t able to return to work for some time and was only paid SSP during this time.

Gareth was due to go on holiday shortly after the accident happened, but was unable to go due to his injuries and had to cancel the trip. Gareth was hugely disappointed he had to cancel his trip and had to also forgo the deposit on the holiday.

Gareth was looking at progressing his career at the time of the accident and was hoping to push forward to being a pub manager soon. This had to be put on hold whilst he took some time out to recover from his injuries.

Gareth was also a keen cyclist and loved to get out on his bike a few times a week. Sadly, the experience of being knocked off his bike caused Gareth to become anxious at the thought of going out on the road on his bike again, saying he felt exposed and that ‘the accident happened too easily’.

He was also extremely active and loved to go hiking and scrambling in his spare time. He was not able to enjoy these hobbies anymore because of his ongoing pain and mobility issues and was becoming frustrated with his situation.

How we helped with these challenges

Our Client Support Manager began supporting Gareth immediately. We used our emergency fund to enable Gareth to access psychological support straight away to help him to overcome his feelings of anxiety and frustration. This enabled him to come to terms with the accident and the anger he felt towards the driver of the vehicle, and to overcome his feelings about losing his hobby and love of cycling. We also secured an early interim payment to continue funding psychological input, including Cognitive Behaviour Therapy.

During the course of his claim, Gareth relocated, and so we ensured this psychological support continued despite him moving to a new location. Gareth’s physical injuires also meant that he struggled to attend regular appointments in person, so we were able to arrange this support over the phone and video calls.

To support Gareth financially as he was unable to work, we highlighted the possiblity of securing some financial support for Gareth by negotiating interim payments with the Defendant insurers. We were also able to recover the cancellation costs of his holiday, so that he wasn’t out of pocket. As part of our investigations, we also explored potential pension loss due to Gareth being unable to work, along with any loss of earnings he might have to pay back to his employer and potential loss of bonus he had experienced.

Although Gareth was receiving physiotherapy rehabilitation through the NHS, we also arranged a gym membership and one to one personal training sessions so that he could begin to regain his former mobility. Gareth was thrilled to be able to get back on a static bike in the gym, and this assisted with his physical and mental rehabilitation. He was also able to use the other leisure facilities at the gym, including the swimmingpool, helping with his recovery and strength.

We built a whole team to work on Gareth’s case, clearly looking at the case and planning the process carefully to ensure we were always pushing ahead with the case and avoiding any unnecessary delays.

By assessing the case from the start, we were able to gather all the evidence needed to support the case very early on and ensure we got the best possible outcome for Gareth. The team were always thinking ahead to what steps were coming up next, and considering what other evidence would need to be put together in the case. By doing this, we were able to book early appointments to gather medical evidence, making sure any waiting times were kept to a minimum.

By engaging with the Defendant insurers very early in the case, we were able to work collaboratively with them to open up funding options to pay for ongoing support for Gareth. This collaborative working meant that not only were we able to negotiate early interim payment for treatment, but also discuss any loss of earnings cover Gareth needed.

By having a full team approach to Gareth’s case, we were able to manage lots of elements simultaneously. This ensured that everything was progressed as quickly as possible for him, avoiding any unnecessary delays, both in Gareth’s recovery and the smooth running of his case.

The support provided by the private medical expert also helped Gareth to understand the full nature of his injuries and how this might impact him in the future. This additional insight and information helped him to understand the full picture of his injuries and helped him to consider different options and make an informed decision.

Within 18 months of Gareth instructing CFG Law to act for him, we were able to secure over £70k in compensation for him. Gareth was over the moon with this outcome and is now looking ahead to the future.

As a result of all this input, Gareth was able to return to work just seven months after the accident and he is now keen to progress his career of working towards becoming a pub manager. It’s fantastic to see Gareth making such a good recovery back to his former lifestyle and ambitions.

Gareth is also now back out walking, enjoying being active again. He has joined a hiking group to replace his cycling hobby and has found a new love for walking instead of cycling. Before the accident, Gareth had planned to walk Ben Nevis, so it’s brilliant to be able to have got him back into this interest and enjoying walking again.

What Gareth had to say

“CFG were recommended to me by a colleague. From the first contact and meeting at my home, the reprentatives, especially Natasha Ulph and the paralegals, have been superb. Clear, concise, helpful and honest about my situation. They genuinely seemed interested in my case. Natasha’s advice was very helpful in making my decisions and my wellbeing seemed to be a priority. I am extremely grateful for the achievement of a very fair settlement.”